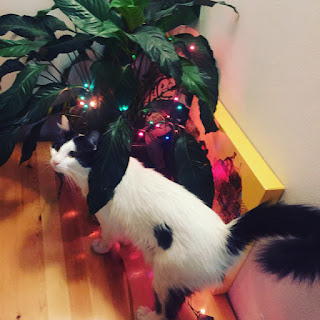 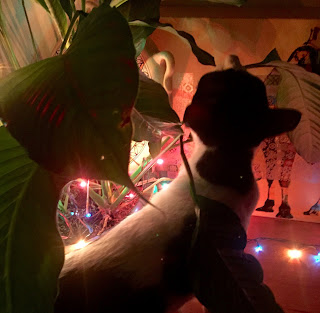 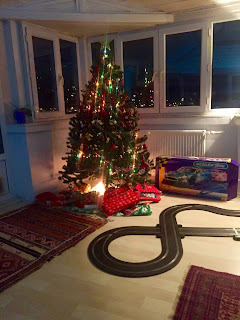 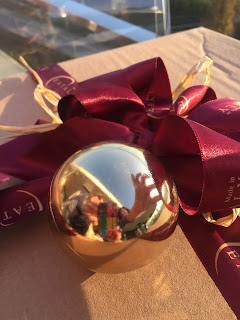 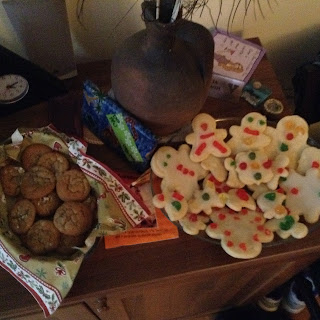 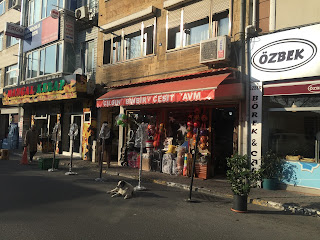 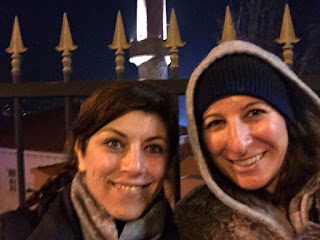 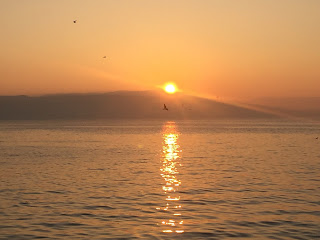 Moody Wednesday morning 9 am and all is well.  I'm lying in bed drinking Frangelico & coffee and the kitties are nearby playing chase. This scene takes me back to my time in Bahrain as it's this very position that I normally blogged in...

I woke up at 7 and did my normal weekday routine and trotted off to the university. Because I don't believe in checking work emails after work, and sometimes leave work early... I didn't get the message about the cancelled meeting...

Now, normally I would be bummed that this happened, BUT as the university is uphill, it was snowing up there!!! It's not snowing here in Büyükdere... It was so exciting to see snow flurries.  Ed-vice, a Canadian, laughed out loud when I exclaimed that it was ''snowing hard'' while we were walking on campus.

So, after a quick romp in the snow, I hopped on a dolmus and here I am in bed moments later to tell the story...

In other news, Mr. J.S. sent me a care package and it arrived Monday- just in time for inclement weather. I must say, I was feeling so toasty walking to the service stop this morning :) I've definitely decided that if you dress warm, and comfortably, you can live in a place where it snows. Took me a long time to get to this conclusion though.  I wonder what's next; Central Asia possibly?

Well, Georgia is what's next in the travel log in a week or so. We are getting a great deal flying into Tbilisi and plan to trek through the mountains too. I assume the great deal is due to winter, but I'm so excited- especially since I have my inclement weather clothing now!

I'm pretty excited for mountains, hotsprings, fascinating old city, purchasing pork products AND stocking up on booze! I think most of you realize that I'm not a proper drinker and certainly can't hold my liquor, and get tipsy way too fast (haha) but when you live in a country where liquor is prohibitively expensive to purchase, you tend to relish every duty free store in any airport... On the list is gin (newish discovery for me that's currently been trending for 2 years now), wine and... I don't know- perhaps some sort of 'grab bag' new discovery in the making awaits me.

So yea, life is rolling along here in this city that I dwell in. I do dwell too- in happiness and wonder and da kine. Work and play balancing with sport and chill. I think I have it down.

I feel pretty local in terms of public transportation, which I think I've mentioned before.  I had my first "FUCK THIS CITY FUCKING TRAFFIC" moment on Sunday... lol. I was heading in to Örtaköy to meet up with a friend from Gaziantep and got stuck in this huge clusterfuck on the Sahil Yolu (coast road). Total cf traffic in Yeniköy, Istinye, Emirgan, Bebek and Kuruçesme, where I finally heard 2 ambulances racing behind me for an accident that was up ahead.

But I digress, the original traffic cf was right in my very own neighborhood. I was at the bus stop waiting for the bus and I finally realized it was 1/2 hour late (getting to Örtaköy with ease, I figured, only involved on form of public transport; I should have known better it's a bad idea of the weekend- even a weekend in winter). So I head towards the previous stop- which is at the Y-intersection with my street.  At that bus stop there had been a SMALL accident; a fenderbender type situation where 2 cars were going and one slowed or whatever and the other one piled into it. It wasn't a 'bad' accident at all. In fact, hardly a dent on the backside of car #1. So, there are a few people about- but the car owners are nowhere to be found... They had their accident and got out and LEFT THEIR FUCKING CARS blocking the way to the thru-street. So, obviously no buses could come through, but the dolmus could.

That seriously hurt... lucky for da kine good vibes I had going. Farahnaz & I ended up having a great reunion while eating Vegas Pizza and then Kumpir :) Hilarious moments spend walking along with Bosphrous with da kine and going into MacroCenter so she could buy some bacon for friends back in Gaziantep. So funny.

Speaking of reunions, I love that you can meet up with someone again and step right back into that zone with them- no matter how long it had been since last seeing them. We quickly fell into that pattern of walking and shooting the shit.

Today I'm meeting up with Karin, one of the Fulbrighter's I knew during my 1st year in Bahrain.  Looking forward to catching up with her and see what incredible deeds she is doing around the world. It would be difficult to fall back into pattern with Karin, as we met at the beach last time we were together :) Today it's supposed to rain or snow down here. Looking out my window now though it's still just moody.

Well, it's still not snowing... I'm so excited for the kitties to experience snow for the first time! The desert-dwellers are surely in for a treat. I feel like I am the same way each time I experience snow. Snow hasn't really been much of a part of my life ever- outside of visiting snowy places and skiing and snowboarding at various times throughout life.

Christmas was a good time. We were at Da Kine's house in Cihangir having a bake and bake session; we made cookies (both gingerbread and cut-out sugar cookies), awesome nachos, pumpkin lasagna.  and had a proper par-tay with some friends.

As we are all fans of Drunk History on YouTube (I didn't even know that it had expanded into a series), we realized there was a hole in the market so we did a dry-run of a forthcoming Drunk History episode- which will remain a secret until its unveiling. So Christmas was a 2-day extravaganza with good friends and good cheer.

New Year's plans you ask about? Well, just another low-key gathering in Cihangir. I think a re-do of Nachos is on the menu. Perhaps Vegas Pizza too.  I absolutely love Vegas Pizza.  Now there is one in Örtaköy too so a reason to put Örtaköy back on the 'frequently visit' list, along with Osmanbey metro stop to stop by my favorite bakery for those Portakals and Acībadems... Yum.


Posted by Maui Hollyday at 10:05 PM No comments: Links to this post