The Wu Li Master dances with his student. The Wu Li Master does not teach, but the student learns. The Wu Li Master always begins at the center, the heart of the matter.... This deals not with knowledge, which is always past tense anyway, but with imagination, which is physics come alive, which is Wu Li....
somebody in the know said that
Aloha Kakahiaka na oukou (g'day all)
I woke up immediately engaged in dance: Summer- I can smell summer today. Here in the lands of Pauwela, Haiku, NNE coast of Maui (coordinates 20°55′14″N 156°18′45″W / 20.920528°N 156.312631°W / 20.920528; -156.312631) wikipedia  there has occurred a shift. It is ever so subtle but Kama`aina can feel it. First, in a city one smells the heat from the sun radiating down onto the asphalt (concrete jungle) - the pungent odor that, at first, is apparent, then becomming familiar. It is like this in the jungle as well but instead of asphalt it is the heat of my gravel and dirt driveway... (lol). This is true though. Next indicator: sunrise spontaneously erupting with no cloud cover to gently stir myself out of slumber. Instead it seems a demanding-immediate-attention interruption from hypnopompic state to reality. The event stirs up the agitation, or perhaps delight, of the bird populations here into a cacophonic symphony of earthly sounds as they greet the day and start foraging.
So, I feel the shift & am grateful I still retain a  primal enough sensibility to experience this. It will become more subtle in the next few days and will seem natural soon enough. At least until the trade winds come back bringing much welcomed evening & morning rainfall. Everything happens for a reason & I see this is a precursor for me for NYC. There will be no gentle rainfall to stir up the night blooming jasmine that invades me senses, no cloud cover enveloping my domain to help ease daybreak, etc. So, time to charge city life for a few months I suppose...
The Wu Li Masters will find me. Maui is not going to let go of me easily though. Friends have already decided we are going camping in Hana next weekend. The road to Hana; there is a destination of course, Hana, but there is so much more involved. The road to Hana coats you with a slick, permeable substance that attracts one to the sheer magnitude of what is being experienced- visually, physically, emotionally. It is a road trip if I ever had one- every time. Explosions of waterfalls around every bend to audible shock you into a mesmerized stupor- or sometimes it is just a trickle of water that seems so deafening; the fruit stands that hug each ess curve so precariously that you feel the coconuts on the bamboo counters will roll al the way down the hill straight into the ocean if balance is lost. And the requisite fruit flys that hover just above each nectar nugget... It is all so much to process right now. I want to experience it all so I can remember...
What will be my fetish in NYC? A friend recently brought up the subject of fetishes. We were having a hard time distinguishing between a fetish and a passion strangely enough. I wikipedia'd fetish: Fetishism, the attribution of religious or mystical qualities to inanimate objects. Now, an inanimate object is something that is deficient of having a quality associated with living organisms. This is fun to think about! So Wikipedia has some new definitions of fetishism:
I just found this amusing- that is all...
Ok, clearly I cannot focus on any one thing right now...
Posted by Maui Hollyday at 8:17 AM No comments: Links to this post 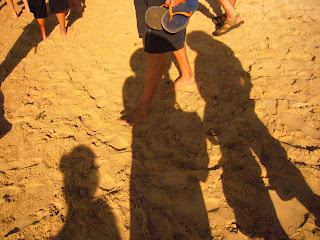 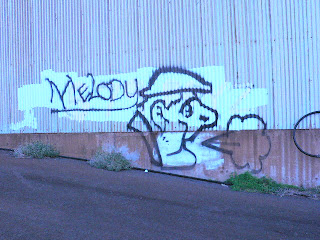 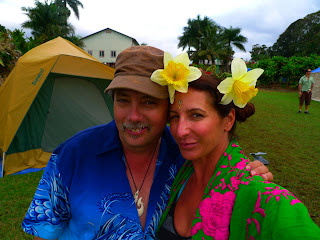 Ok, it's 3:30am
Well into the bewitching hour. The Field: Out on my Lanai where, at this moment, no traces of moon glow exist. Through the dense foliage I look through the  Bird of Paradise tree's open flower-ettes that are so majestically separated to part the skyline.  Barely visible through the dark quietness of the night but the moon has since journeyed from this spot & moved on leaving nothing.
So, I listen to the crickets, more time-challenged roosters and  intermittent winds sweeping down the gulch and when passing near my place seem to always linger and spit out a brief rainfall. Here it comes now in fact. I really know this place, these lands of Pauwela. That is just so cool the rain came when I was reflecting on it ever so poetically!
I have spent over 3 years pondering from this Lanai. Late at night alone, or weekend mornings with Neighbor Nancy- the Norse Nissa. Mr. Kolohe K Kitty Kat spent some sweet times out here late at night. He saw so much more action of course cruising around evah so stealthily (HA he was 14 pounds & already over his desire to kill unless very easy to manage...). Still, he surely encountered more night wanderers than I did here. Only one seemed to take an interest really. 'He' stuck around a while. I believe he is still here. The sea salt put him in his place so to speak. The salt thing though needs updating. I updated the ceremony about a month ago. I felt it again. Not in a strange way but, just as I told it the first time around, I'm just too busy right now with a lot on my mind with work & school that I don't have the proper time to delve into these esoteric ponderings. Tonight actually would be a good night-
So got a bit off track there...
...And another round of warm winds carrying light mists. I can hear raindrops falling in different consistencies. Hawaii has over 100 terms for describing rains: `Awa refers to fine rains or mists, kawa it for heavy rains, unexpected rains are ililani, slanted rain is ua hikiki`i. Quite a beautiful language that accounts for so many varieties, that they took the time to ponder these rains and understand them; what precedes them, their innate qualities- and what a place that rained so much this was necessary!
So the pics: #1 on Baldwin Beach for Earth Day 2 years ago. I liked the shadows. #2 is at the old Paia Mill. #3 was taken ? by ? at The Source Interactive Arts & Music Festival right here in Keanae- about 20 miles up the coast. Keanae Peninsula- is there a word to...no I don't think there is. It's sweet. It was a 3 day party, with intermittant downpours! Dancing recklessly in a mudpit, and sweatlodges and great wholesome food, and friends not seen in a long time. Anyway, Michael is the VJ & dedicated Maui Burner. The go-to guy for all the updates... that I haven't been going to...because all I do is work, study & sleep...but...soon to be over...in 2 days...and then 3 faboosh weeks of no school...Yea, full moon party was last night...and I couldn't go...because I had to write a paper...which I'm still not finished with yet.
Right then, it's 4 am & the rain is abating, telling me something- I think it has something to do with sunrise-
A Hui Hou a hiki i ka la a`e
Posted by Maui Hollyday at 3:18 AM No comments: Links to this post

hypnopompic ponderings on a crisp Sunday morning in the jungle 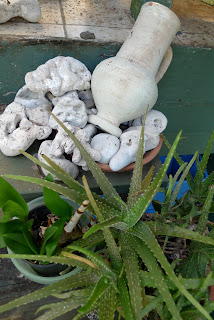 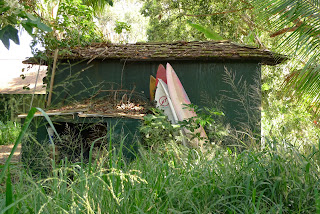 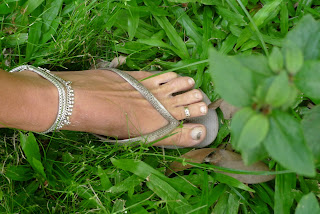 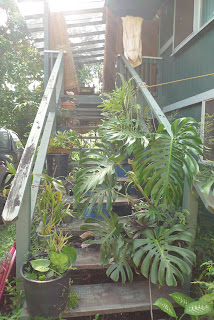 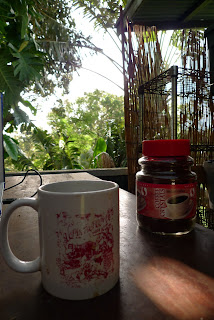 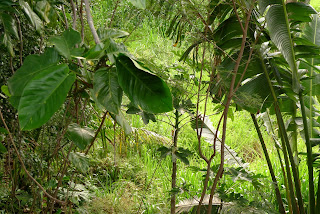 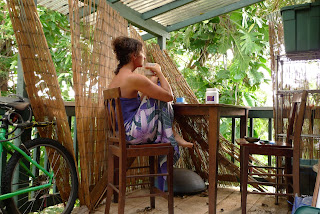 Greetings from 20°55′14″N 156°18′45″W
So I woke up early (roosters, birds, owls) and greeted the day on my lanai listening to sounds. No human activity to distract me from these moments- only the biorhythms of my Mac and me are witness. How strange.
Resorted to some instant coffee in the fridge from a camping trip years ago. I am reminded of Chile now. I recall how difficult it was to find a cup of coffee that wasn't Nestle... And the strange phenomenon of these stand-up coffee bars in Santiago where only business men went to get served by exotic females. And then there was Hilary- she enjoyed instant coffee, and seemed to be genuinely addicted to the packet coffee mate creamer stuff. She used to pilfer them from basecamp when we worked on Kahoolawe Island (archaeologists). After that project ended she continued her love affair with artificial creamer by resorting to purchasing large tubes of them at Costco. I could never manage to bring myself to go to Costco. Something about seeing too much of people I suppose. Or at least too many Costco people. I don't support it. I have so much on my mind lately and ideas unexpressed verbally or even written (except for the brief musings posted on Twitter (MauiHollyday).
Work weighing heavy lately & wearing it like a tightly cloaked increasingly heavy veil wrapped around my body and yearning for a loose Polynesian pareo to take its place. Turtles; unidentifiable (extinct) turtle carcasses found in a trench buried deep beneath a cultural layer on the south shore consumes my world as of late. Explanations that no one wants to hear- or at least some choose to ignore. It's big. Tiring of CRM (cultural resource management) work, or more appropriately tiring of with context which goes with it. I initially (14 years ago) thought science was about sharing ideas and coming to educated theories by talking with other experts in the field. This is so but there is an element of secrecy that exists because of this 'taboo' or exposing too much. It is increasingly difficult for me to not express my views and receive validity or criticism- I would welcome both.
At the moment all this noise is melting off of my bones. The deafening cacophony of the morning sounds feeds my need for solace. Here is some visual stimulation for you guys so you can get into my head trip... Ok ok, I can't figure out how to change the pictures to get down here. Damn, sorta ruins the effect I was going for but...
So it is time to come out of the fog and get rolling. It's been an extremely sweet morning and now the clouds cloak the sun to add more texture to my dimension. I feel honored to not only internalize this but be able to express it. Let me know what you think.
Posted by Maui Hollyday at 6:54 AM No comments: Links to this post